Posted at December 12, 2012 By : Edward Categories : Blog Comment: Comments Off on Solar Myths

Clarifying fact from fiction, Edward Blake Thomas, Camel Solar Product Manager at AET, exposes some of the myths at large within the solar thermal sector today and proves why this technology is here to stay.

Sunshine is free. It does not have to be purchased, mined, refined, imported or transported. Which is why, with the cost of fossil fuels rising rapidly and with business-operating margins becoming ever tighter, building owners and occupiers are now giving serious consideration to solar thermal systems for commercial and industrial HVAC applications.

That said, a number of myths persist around solar thermal technology, which need to be addressed to help fm’s and other specifiers understand and appreciate the benefits of the technology.

First of all, many people still think that solar thermal technology is not suitable for the UK climate.

Just because the UK is renowned for its sunshine-free climate, does not mean that solar thermal technology cannot deliver hot water and benefits as those situated in sunnier climates. In the northern hemisphere, for example, the optimum performance of a solar thermal collector will occur when the unit faces due south. However, thanks to the efficiency of sleek, modern collectors, installations facing south east, south west, or those which are even orientated westward can now provide a meaningful energy input.

Both conventional and façade type solar thermal collectors can supply up to 60% of a building’s heat demand over a year. Solar irradiation in a UK winter is about 30% of its summertime peak. Even so, with a suitably sized array, hot water can still be generated. It is not unusual for water to be heated to 60°C in October and November, for example, helping reduce carbon emissions.

Another interesting point to note is that in the Middle East and southern Europe, solar thermal systems have even been linked to absorption chillers to provide chilled water by using heat from the sun. It is a perfect synergy of technologies, which proves that contrary to popular belief, solar can be used for both heating and cooling.

Performance efficiency and life expectancy is another area of concern for those of us active in the solar thermal sector. The myth persists that pretty well all types of collector look the same, behave at the same levels of efficiency and last as long as each other. Not true.

The design and manufacture of the collector is critical in determining its efficiency and life expectancy, and should be one of, if not the critical factor in selection and specification.

For example, the design and welding method used to connect a collectors copper absorber pipes and manifolds to the back of the absorbers will have an impact on efficiency of the heat transfer process. The type of coating used on the collector will also affect its performance.  The construction also impacts on the efficiency over time when corrosion can dramatically reduce performance.

Evacuated Tube type Collectors also vary in efficiency. These collectors typically comprise high-efficiency, double-walled evacuated glass tubes (known as a Sydney tubes), each containing a heat absorbing plate. The vacuum between the tube’s twin walls works in the same way as a thermos flask helping reduce both convection and radiative heat losses from the absorber, to improve the collector’s efficiency, in cold, ambient conditions such as the UK. The glass is made from borosilicate which has a high chemical and thermal shock resistance. This efficiency is further enhanced by a high efficiency selective coating applied to the outer wall of the inner glass tube, and in some cases the absorber, which helps increase the amount of solar absorption while minimizing reflection. The result is a solar thermal collector which can absorb anywhere from 92%-96% of the sun’s energy, enabling it to work effectively even during the coldest winter months. Tests show such units can achieve temperatures well above boiling point and some units have stagnation temperatures of around 250oC.

Solar thermal technology is an effective renewable solution for many different UK commercial HVAC applications. Once that point is understood, specifiers should appreciate that not all solar thermal collectors are the same. Be critical of the panel’s design and manufacture. The Solar Keymark provides the significant quality distinction in the market place. It gives consultants, contractors and end-users much needed assurance that collectors offer excellent energy efficient performance and are designed and manufactured to the highest standards. 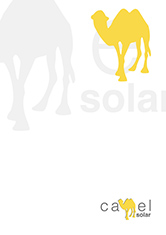